EXCLUSIVE: Moment cyclist confronts angle grinder-wielding motorbike thieves in broad daylight – before pushing one over as they try to flee on the £13,000 vehicle

By William Cole For Mailonline

This is the moment a cyclist confronted brazen thieves trying to steal an expensive motorbike in broad daylight.

Footage shows a gang of masked men – one wielding an angle grinder – as they try to cut free a £13,000 Honda Africa Twin bike on a street in the City of London.

The dramatic theft however ended in failure when bystanders pushed the would-be thief and bike over as he tried to ride it away before calling police on them.

All four of the men managed to flee the scene, with one leaving behind a white Nike trainer. City of London police are investigating the incident.

The astonishing video was captured by a semi-professional cyclist who gave his name as James Richards, who lives nearby.

Astonishing footage shows a gang of masked men -with one wielding an angle grinder – as they try to cut free a £13,000 Honda Africa Twin bike on a street in Spitalfields, City of London

The 34-year-old was walking home from cycle training when he spotted the group of men surrounding a bike parking bay in the Spitalfields area of the city.

‘I was walking back from training and came across a white van and two mopeds parked in the road outside Tracey Emin’s old house,’ he told MailOnline.

James said it soon became clear that the men, two of whom were on mopeds, were planning the cut through the bike’s three locks and then load it into a white van they had waiting nearby.

‘I automatically began filming. There was a man angle grinding the chain off a large sport bike.

‘I wanted to film their faces so I went toward the two mopeds, I then approached the man with the Angle Grinder at which point he came at me with it. 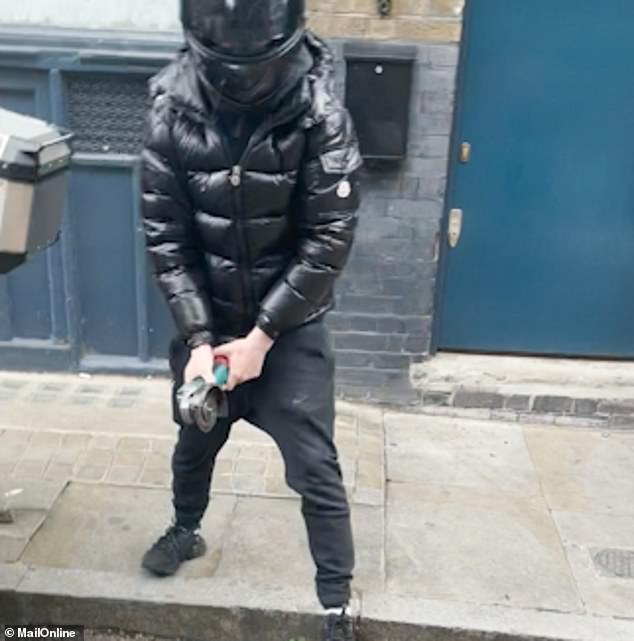 ‘Their plan was to load the bike into the white van, however the van and one of the mopeds drove away as it became clear I was calling the police and filming, leaving two men and a single moped on their own.’

After the video clip ended James said he called the police as the man with the angle grinder desperately tried to cut through the bike’s third lock.

By now a group of ‘three or four people’ had gathered at the scene, and is believed to have included collaborative art duo Gilbert and George who live nearby and came across the incident. 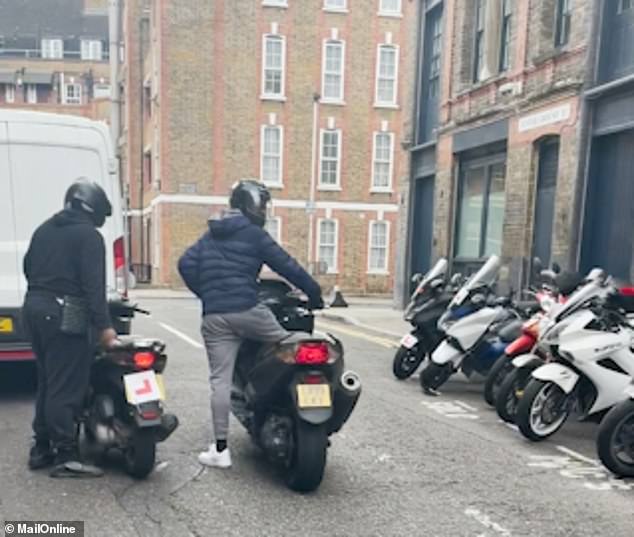 James said it soon became clear that the men, two of whom were on mopeds, were planning the cut through the bike’s three locks and then load it into a white van they had waiting nearby 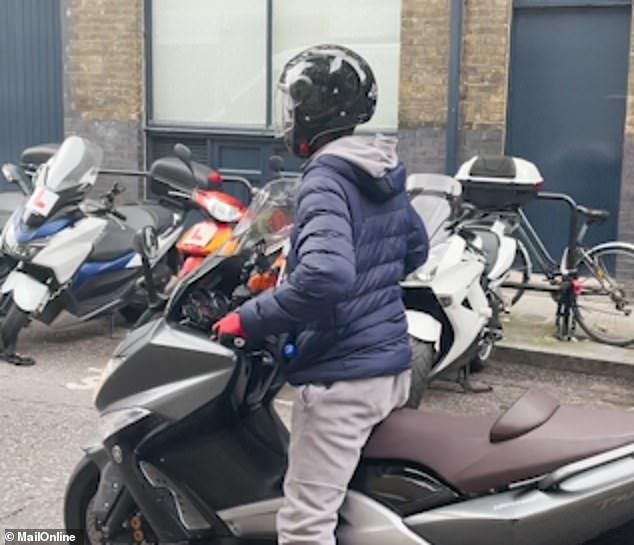 ‘They were just innocent bystanders, it’s their neighbourhood,’ added James.

He said he and ‘another chap’ then waited for the thief to cut through the lock before getting on to the bike – before the pair bravely pushed him over to rescue the bike.

‘He must have finished cutting the third lock and then looked up to see all his friends had gone,’ said James. ‘I don’t know what he was thinking because he had no way of starting it so couldn’t ride off on his own.’

‘He managed to get away and ran off but left his white Nike trainer.

‘The police turned up very quickly after this but all they thieves had scarpered. They took his trainer away for DNA evidence.’

MailOnline have approached City of London police for comment.

James added that it was not the first time he had witnessed an attempted bike theft in his neighbourhood.

‘These are not locals, they are people coming into the area to steal bikes. I’ve seen it happen on that street before, there are usually expensive bikes parked up there.’