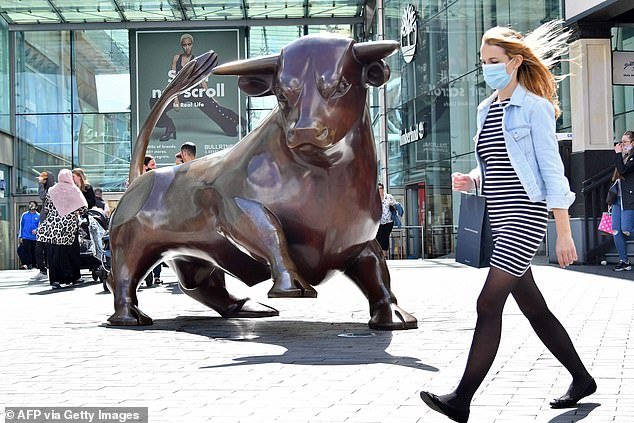 Landlords were some of the big winners on the stock market as offices and shopping centres gear up to reopen later this year.

The commercial property market has been hammered since Britain first went into lockdown last March, with warehousing being the only sector that has really thrived.

Since the Prime Minister’s Covid roadmap was published on Monday, however, many of these hard-hit stocks have made chunky gains.

On the charge: Shopping centre-landlords were in hot demand – with Birmingham Bullring (pictured) -owner Hammerson climbing almost to the top of the FTSE 250 last night

And British Land, owner of Broadgate Circle and other sites in the City of London, rose 3.8 per cent, or 18.8p, to 520p, with an 11 per cent gain since the lockdown plans were announced.

One of the biggest discussions prompted by the pandemic has centred on the future of work: will Britons all work remotely or will we all flood back to offices?

The answer is probably a mix of the two, with many companies pledging to roll out more flexible working policies permanently. 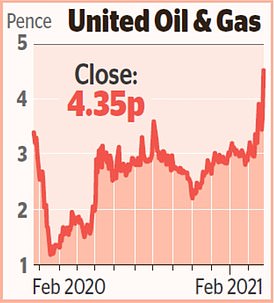 United Oil & Gas shares climbed for a second day after tests on a well in Egypt found more oil and gas reserves than it had expected.

The rally came as stock market filings showed serial small-cap investors David Newlands and his wife Monique, who have cropped up on the shareholder roster of many tiddlers, increased their holding in the AIM-listed explorer.

British Land’s rise shows hope that cities will revive, and there is clearly faith that Workspace’s shared office business model could be taken up by companies that want to ditch their permanent headquarters.

Brent crude rose 2.7 per cent to $67 a barrel, closing in on the 2020 high of $68.60 last January, as vaccine drives boosted hopes that petrol and jet fuel demand will recover.

Housebuilders too were on the up on signs that the stamp duty holiday will be extended. It is credited as being one of the key drivers of a sales frenzy.

Video game stock-watchers took note of brokers at Shore Capital, who upgraded their rating on Team17 and Frontier Developments.

Team17 was upped to ‘hold’ from ‘sell’ and Frontier to ‘buy’ from ‘hold’ after lockdowns led to a surge in people playing games while stuck at home.

Over on AIM, Angling Direct failed to make a splash with a trading update that showed it defied the retail gloom during lockdown. Revenue rose 27 per cent to £68million in the year to January 31, despite stores closing for months.

The fishing tackle seller has benefited from hundreds of thousands of people taking up fishing or renewing their licence for one of the few socially distanced hobbies available during the pandemic. It fell 5.7 per cent, or 4.5p, to 74.5p.

After a bruising couple of days, digital currency bitcoin reversed its slide, adding 5.3 per cent and taking the price to around $49,850.

This lifted bitcoin ‘miner’ Argo Blockchain, which uses algorithms to unlock bitcoins, by 10.3 per cent, or 22p, to 235p.