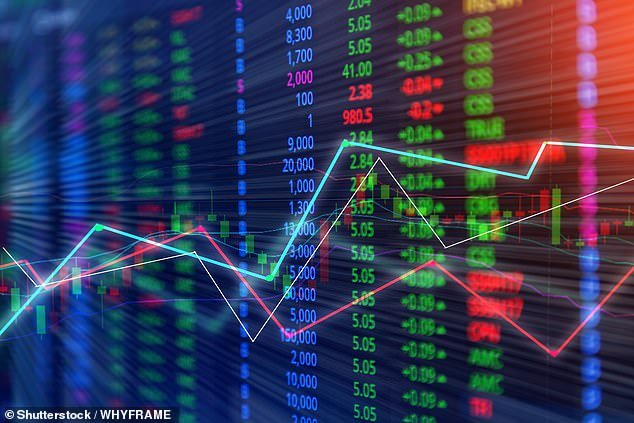 Investors who have used London-listed funds to access the seemingly unstoppable US tech rally chalked up heavy losses yesterday.

The likes of Scottish Mortgage Investment Trust and Allianz Technology Trust have been in demand in the last year from British retail shareholders who prefer not to buy into firms such as Apple, Facebook, Google-owner Alphabet and Netflix directly.

But the boom since markets bottomed out last spring could now be starting to fizzle out.

There are a few issues at play here. One is the rising concern that sky-high market valuations the companies built up – with Apple, for example, becoming the first public US company to be worth more than $2trillion (£1.4trillion) in August – going too far and now due a correction.

Another is the prospect that a global recovery will push up inflation and interest rates, denting the appeal of fast-growing stock market companies. And another is Tesla boss Elon Musk’s foray into bitcoin, creating an uneasy link between the cryptocurrency and the electric car giant.

Amid the drama of the most recent bitcoin explosion, Tesla put £1.1billion of bitcoin on its balance sheet early this month. But having peaked at $900 a share last month, Tesla closed at $699. 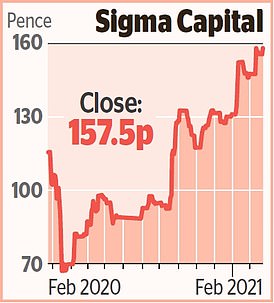 Rental housing group Sigma Capital will build 75 homes at a site in Perth, Scotland, working with Springfield Properties to put up the two, three and four-bedroom houses.

The homes will generate around £760,000 in rent per year, while gross development costs, including buying the land, will be nearly £12million.

Shares in AIM-listed Sigma Capital, whose boss Graham Barnet said there was a ‘significant undersupply’ of quality rental homes in Scotland, rose 1.3 per cent, or 2p, to 157.5p.

Meanwhile, bitcoin fell as low as $44,896 yesterday having hit an all-time high of $58,445 just two days earlier. Growing question marks and nerves about how much longer the tech party will last saw the Nasdaq index drop by as much as 1.4 per cent yesterday, as companies such as Apple and Amazon fell in early trading.

Back on this side of the pond, Scottish Mortgage Investment Trust tumbled 5.1 per cent, or 64p, to 1203p.

Beyond tech companies, though, the celebration of Boris Johnson’s roadmap out of lockdown continued in full force.

The latter got an extra boost after hiring former John Lewis finance boss Loraine Woodhouse as a non-executive director.

Easyjet advanced 4.5 per cent, or 40.2p, to 932.4p, after it said the lockdown roadmap had triggered a surge in bookings.

Its founder, Sir Stelios Haji-Ioannou, chose this moment to check out more shares. He and his family reduced their holding in the airline from 28.7 per cent to 27.7 per cent.

Stock market documents did not say how much Stelios earned from the sale, but it is thought to have raised around £32million.

Corporate restructuring group Begbies Traynor – up 5.4 per cent, or 5.5p, to 108p – said its business recovery and financial advisory divisions are doing well, putting it in line to hit profit targets.

And doorstep lender Non-Standard Finance rocketed 20.9 per cent, or 0.74p, to 4.25p after it said it needs to help salvage the company and stop it breaching its loans. Its largest shareholder, Alchemy, supports the idea to sell new shares.